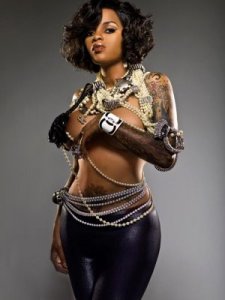 Straight from the streets of Miami, Jacki-O knew music would be her opportunity out of that way of life.  She didn’t just make music, she strategically made music.  Being from the streets, Jacki-O could have easily made street music.  Although nothing wrong with that, she made street music with a relatability and femininity that would appeal to the street and beyond.  If you’re a dude you’re going to see where she’s coming from as well as be enticed with her sexiness.  If you’re a female you will definitely relate to her stories and have an appreciation for her sexual openness.  Jacki-O is not selling sex.  She is celebrating the power that comes with sexuality.  With power comes respect and Jacki-O has gained the respect of both her female and male counterparts.

Her story is compelling and could easily be the story of an urban man or woman.  She always loved music and began her journey as a rapper by writing poems and then putting those poems to beats.  Choosing freestyling over attending class she missed out on a high school graduation.  Realizing the importance of a basic education, she put her music on hold to earn her G.E.D.  She went to college for a little bit and hustled, but knew that wasn’t the life for her.  You gotta remember she’s a writer.  Throughout all of this she never stopped writing which is why you shouldn’t be surprised she wrote a novel, “Grown & Gangsta”.  It’s her take on an urban version of friends following six people as they deal with their pasts, live in the present, and hope for the future.

You can’t place Jacki-O in a box.  She’s a combination of many different attributes which allows her to deliver and appeal to many.  This is why I called her strategic.  She recognizes what she has to offer and delivers.  She says what she wants and can back it all up. Now, that’s a true Hip Hop DIVA.