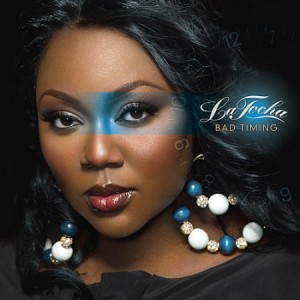 LATOCHA SCOTT MAY BE MOST MEMORABLE FOR HER VOICE AS A MEMBER OF THE 90’S R&B GROUP XSCAPE. THE GROUP HAD MANY HIT SINGLES AND LATOCHA’S VOICE OFTEN SANG THE LEAD VOCALS. AS SHE LIVED IN THE PUBLIC EYE THERE IS A PRIVATE STORY THAT SHE IS HOPING TO SHARE IN HER UPCOMING BOOK ABOUT THE TRIALS AND TRIBULATIONS SHE ENDURED IN BUILDING A CAREER AS A MUSIC ENTERTAINMENT ARTIST. OUT OF THOSE EXPERIENCES AND HER INTERACTIONS WITH YOUNG GIRLS SHE DECIDED TO LAUNCH GOLDEN GYRL FOUNDATION THIS YEAR TO MAGNIFY SELF-LOVE AND SELF-ESTEEM IN GIRLS. BACK WITH A NEW SINGLE, “BAD TIMING”, AND A MIXTAPE SET TO DROP SOON, LATOCHA IS PREPARING FOR HER DEBUT SOLO ABLUM. SHE SPOKE WITH THEHIPHOPDIVA ABOUT HER CONNECTION WITH XSCAPE, HER RELATIONSHIPS WITH HER FORMER GROUP MEMBERS, HER CURRENT PROJECTS, AND HER GOLDEN GYRL FOUNDATION.

HHD (THEHIPHOPDIVA): We all pretty much came to know and love you as the beautiful voice in Xscape. That was 90’s and people still attach you with the group. Does that bother you or do you embrace that?

LS (LATOCHA SCOTT): It does not bother me at all. People remember me from being in the group as far as all of the songs and messages that we put out. I just embrace it and I don’t shun from it at all. That’s how we got started, that’s why we’re here, and I love it.

HHD: We know that Tamika is your sister, but outside of her do you still have relationships with any of your former group members?

LS: Well, we don’t talk on a daily basis. Tiny hit me a week and a half ago and was like let’s do lunch, so we still talk. The only other person that I don’t really converse with as much is Kandi and I don’t know if it’s because she’s really busy or she don’t want to talk to me.

HHD: Why do you think that Xscape still lingers on in our memories today?

LS: I think people respect real music. When we were out there were no gimmicks, there was no auto- tune. You had to actually deliver or you would get booed off the stage. We came from the era where everybody was singing. It was about talent. You had SWV, En Vogue, and Jade out – so you couldn’t come less than great because if not, it wasn’t a good look. I think people still remember what we brought musically, the messages we delivered, and the delivery in our songs.

HHD: You’ve recently released your new single, “Bad Timing”. Tell us how that record came about.

LS: It’s really self-explanatory. Sometimes you meet that person and you think this is the best person at the right time but it’s all wrong. Whether it’s a conflict of work/career and schedule or they may have somebody else on the side. I think it’s a record that’s really relatable. I have so many people hit me on my twitter page like I love it, it’s in heavy rotation, and I’m going through that right now.

HHD: Right now you’re working on your debut solo album which you plan to release next year. I know it’s still early, but can you tell us what you’re hoping to do with the album?

LS: Well, actually I have a mixtape coming out before the album called Truth in the Booth. I was recording in the studio and one of the engineers was like you keep spitting out these hits one after the other with no auto-tune you’re the truth – you’re the truth in the booth. I was like wow that’s a hot title. I was thinking about the fans and how they wanted an album and I was like I’m going to just go ahead and give away 10 free songs to those fans who have been patiently waiting for real music. I’m just excited about Truth in the Booth because when you buy a record you may feel like you only get one good song off the album so people don’t want to buy records anymore. These artists are not giving them real good music. I said I don’t want people to spend their money and not be satisfied so I’m going to give it away for free. I’ve become a student of the game and I’ve seen how Chris Brown came out and did his mixtape and Nicki Minaj come out and did her thing. It’s never been done in the R&B world. It’s a mixture; I have some hip hop on there, up tempos, some ballads, just so fans can reconnect with LaTocha. The album is coming next year and it’s going to have the soulfulness. I don’t think that’s ever going to go anywhere. I was raised in the church so I still have that spiritual grounding in my voice and conviction.

HHD: When is your mixtape going to be released?

LS: The second week of June.

HHD: Right now, you’re working on a reality series. What’s the focus of that?

LS: I’ve been approached by different networks. They really want to delve into me doing a reality show. I’ve done a couple of tapings but I still want to let people know that it’s really about me doing my music. I didn’t want to do a reality show just to say I’m trying to come back. There have been so many misconceptions about reality TV, you see girls fighting and the cattiness, but I wanted to shed a positive light for people who want to become entrepreneurs and who want to get into the music industry and don’t know what you have to go through.

HHD: You’re also working on a book recounting your experiences in Xscape. Can you tell us the craziest experience you had in the group?

LS: Well, there were a couple of crazy parts. But my main objective with the book is to really inspire. There are a lot of people who want to get into the music industry and there are a lot of highs and lows that come with it. I want to let people know about my life and how I wanted to be a singer all my life. Then getting in the girl group and having to deal with different personalities. As well as being the big girl of the group. For so long people didn’t even know my name and I had to overcome that and not be the big girl but LaTocha. The book is about how I stopped eating meat; I became a pescatarian and only really eat fish and changed my regiment. It’s not just about the group but of course people are going to get those stories of how we had fist fights. But I want to shed that light for people who don’t know what girl groups go through and that I went through that in my own group. It’s important for people to know who LaTocha is, and if they want to get started in the industry what to expect.

HHD: This year you launched your Golden Gyrl Foundation. What made you start this foundation and why did you decide to spell girl with a y instead of an I?

LS: I’ve always been the type of person that wants to come in differently. Even when I named the group Xscape I felt that we were different and I put the x in front. I’m never following the norm. I always try to think outside the box. Golden Gyrl is very dear to my heart. It’s one of those foundations that really magnifies self-love and self-esteem. I had low self-esteem being the big girl. My nieces would come over to my house and they would bring their friends and I would be so amazed at how many of these girls just don’t even love themselves. I would sit down with them and be like what’s going on with you? We’d have long conversations and they would want to come back and spend the night and I’ll cook and we’d stay up all night and we’d talk. That’s how it came about. I feel like it’s important for these girls to feel like they have somebody, a shoulder to lean on. Some of them don’t have an outlet. They look at the television and are like I don’t look like that girl. I don’t think I’m beautiful. I’m like stop right there. Look in the mirror and tell me five things that you like about yourself. It’s crazy because a lot of the time they can’t even tell you two things. So I sat down with these girls and was inspired by them and decided I am going to launch my foundation for all those girls that feel like they’re not special and they’re not fabulous. I always tell them about my five golden rules: never doubt yourself, never procrastinate, never deny yourself, never allow anyone’s negative opinion to become your reality, and never stop believing.

HHD: What makes every girl golden?
LS: It’s them. It’s what they bring to the table. It’s their energy, their personality. It’s everything about them. It’s their walk of life and who they think they are. I tell them to love themselves because you can’t love anybody else if you don’t love yourself.

LS: A woman who is passionate about what she does, stays committed to what she’s doing and believes in herself.