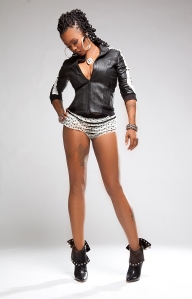 THEHIPHOPDIVA.COM had a very interesting convo with Khia…here’s what was said.

HHD: Pretty soon you’ll be releasing your fourth album “Khia Shamone|Motor Mouf”.  Tell us about what we can look forward to hearing from the album and how it’s different from your past projects.

KHIA:This album is a double disc.  It’s a crossover album.  The Motor Mouf side is just a follow-up to “Gangstress”.  The Khia Shamone side, I’m kinda introducing them to me as a songstress.  I’m touring with a band.  I’m kinda singing.  I’m unplugged with the live instruments instead of just tracks.  It’s more me showing me as an artist and not just a rapper.

KHIA: I guess being a lover of music and wanting to showcase my talent.  I think the industry does a lot of collaborations trying to sell records and do numbers.  I just wanna showcase me and give my fans the chance to get to know me.

HHD: With this album it’s been said by yourself that you achieved what you set out to achieve which is total creativity and freedom.  For us, the first thing we heard from you was “My Neck, My Back” which is pretty free in its lyrics.  What new-found freedom have you achieved on this album?

KHIA: I rap just for a hobby.  I’ve always been a lover of music, a writer, producer, and composer.  With my other albums it’s been really me talking mess over a beat.  I think a lot of hip hop now is watered down.  It doesn’t take much.  Anybody can be a rapper.  I’ve done everything I wanted to do in hip hop.  All of the songs from Khia Shamone were produced from scratch, from the bottom up.  To get everybody to come in and play the music live is a different feeling .  The show is better because people are able to come out and see a live show.  Me being in band, me being in chorus all my life, and studying music — people don’t know that side of me,  just in the hip hop world.  To showcase that on Khia Shamone, this is my best album ever.  This is where my heart is at, with music and not just rapping.

HHD: Your lead single, “Been A Bad Girl”, it’s sexy similar to the sexiness we heard in “My Neck, My Back”.  Do you find these types of songs to be what your fan base expects from you?  Why or why not?

KHIA: Yes they do.  I get a little bit of everything, I guess marketing and promotional-wise.  Hot, sexy, racy stuff that’s what we always promote first.  A lot of people hear “My Neck, My Back” and until they hear the album they be like “Oh okay, she got a lot of different songs.”  I guess my signature would be grown and sexy.  Once you get the album it’s full of everything.

HHD: What I probably appreciate most about you is your ability to be real and always speak what you feel without holding back in any situation.  What most people don’t know about you is exactly what you’ve been saying.  You’re serious about your artistry and you’re involved in all aspects of music.  We all know that everyone plays into the drama and controversy.  Do you think you play up the controversy rather than the other talents and skills you have to offer?

KHIA: I think it’s how they perceive it and take it.  They know I’m mouth almighty.  They like to get the juice.  A lot of people don’t read books.  My talent or my artistry isn’t going to sell a magazine or get a lot of hits on your blog site.  They want to hear my opinion of things.  They know I’m a comedian/gag queen/controversial artist.  They know she gone keep it real and we wanna know what Khia got to say about this.  I enjoy it because it’s still entertainment to me.  Just being a female they want to know how you feel about the other female artists.  I don’t think I really play into it.  I just think that it’s a part of the job.

HHD: Your success and what you’ve accomplished on your own should definitely be respected.  Are there any artists out there that have influenced your music or which artists do you have respect for?

KHIA: I have an old soul so I listen to a lot of old school stuff.  I’m more into the R&B, and the jazz, and the funk, and the soul.  Tina Turner, Chaka Khan, Sheila E, Teena Marie, Anita Baker.  When it comes to hip hop I listen to a lot of the guys.  Cee-Lo, Outkast, Goodie Mob, Pharell, I love the Neptunes.  Of course Erykah Badu, Lauryn Hill…the people that I respect they’re like me.  They won’t get enough promotion.  They won’t get enough respect.

HHD: I saw that you have a female empowerment track, “Fall Back”, on your new album.  It probably would surprise other people that you are for female empowerment.  Are you for women coming together?  If so, what are you doing to contribute to that cause?

HHD: Tell us something about yourself we don’t know.  Shock us with an interesting fact about Khia.

KHIA: I’m definitely a girlie girl.  I’m a mommy.  I have successfully raised two children.  I’m definitely a homebody — domestic all around the board.  I’m really family oriented.  I’m not a one night stand type of girl.

HHD: When can we expect “Khia Shamone|Motor Mouf” to drop?

KHIA: It’s dropping this summer.  The video should be released in May.

KHIA: Respect and making your own moves.  Taking charge of your own situation and your own life.

Check Khia out at www.myspace.com/khia